Posted on January 10, 2017 by templeofathena 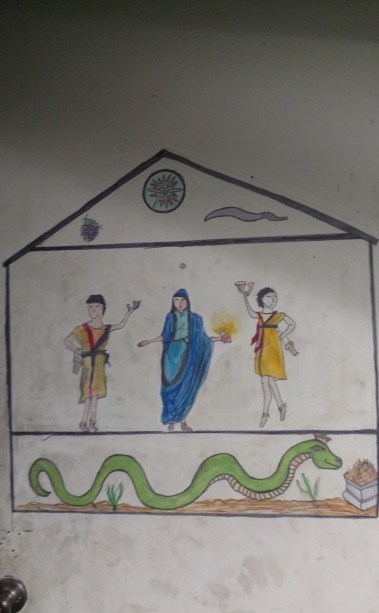 The most sacred, the most hallowed place on earth is the home of each and every citizen.  There are his sacred hearth and his household gods, there the very centre of his worship, religion, and domestic ritual.

This is a tiny cabin; there is not a lot of wall space. As such, I decided to draw a reproduction of a Roman lararium on the back of my front door (okay, its the only door in our house), instead of building a three-dimensional altar. The symbols in the top I changed up a little to be more personally meaningful, but other than that I did my best to make this a faithful reproduction. I had a few pictures of larariums on my computer that I was constantly referring back to while I was working on this. It’s been going for a few months, and I’m still planning on working on it some more.

I’m going to have a owl with open wings above the lararium, symbolizing my patroness Athena, of course. I may also put something for Janus below the lararium. I haven’t decided, it might make it look too cluttered. I’ll probably decide after the owl is done. Right now that owl is not a priority, however, I just really wanted to have a shrine to the household Gods and spirits. I’ve gotten in the habit of kissing my finger and touching it just below the lararium right before I leave the house as a request for a blessing and protection.

My worship has moved more towards Agricultural Deities (I’m living on a farm-in-progress, duh) and Domestic Gods than just the “Big Gods” like the Olympians, which is closer to way it was in ancient world. I’d like to also start a cultus for my ancestors, but one thing at a time right now. I don’t want to bite off more than I can chew at a time, and I have a lot going on. Sarah* and I are still looking for jobs too, and although we haven’t had interviews yet, there are a couple of places that seemed like they really needed employees so hopefully something will pan out soon.

Okay, the symbols in the lararium: Obviously the snake at the bottom is the Agathos Daimon, the protector of pantry and food stores. I drew Him with a crown, which to my knowledge was never done in Rome but He was sometimes depicted that way in Alexandria, my spiritual home. He is drawn facing an altar of fire, for Vesta/Hestia, and also the shelves where I keep my canned goods, my literal pantry and food stores.

The Lares are the household spirits, drawn as young men in dancing postures holding up drinking horns. I think the little baskets they carry are harvest baskets, but I’m not entirely sure. The middle figure is the genius of the family, so it symbolizes both ancestors and the spirit of family and the paterfamilias. The genius is depicted with the hair covered, because in Roman religion you cover your hair to perform religious sacrifices. My genius ended up looking more like a girl than a paterfamilias, put in a way I suppose that can be appropriate. I am in a way the spiritual head of this family; my brother doesn’t believe or practice the way that I do, so that makes me de facto responsible for the role of the paterfamilias, and in this day and age I’m not sure those positions have to be gender-specific anyway. The genius figure I was drawing from was carrying a little box, and I wasn’t sure what it was supposed to symbolize, so I drew it with a glowing light coming from it, as if it was a box of gifts for the ancestors to bestow. I recently found out that its supposed to be an incense box, that the paterfamilias is offering incense to the Househould Gods. Oh well.

Italian peoples regarded the Genius as a higher power which creates and maintains life, assists at the begetting and birth of every individual man, determines his character, tries to influence his destiny for good, accompanies him through life as his tutelary spirit, and lives on in the Lares after his death. As a creative principle, the Genius is attached strictly speaking, to the male sex only. In the case of women his place is taken by Juno, the personification of woman’s life. Thus, in house inhabited by a man and his wife a Genius and a Juno are worshipped together. But in common parlance it was usual to speak of the Genius of a house, and to this Genius the marriage bed was sacred. A man’s birthday was naturally the holiday of his attendant Genius, to whom he offered incense, wine, garlands, cakes, everything in short but bloody sacrifices, and in whose honour he gave himself up to pleasure and enjoyment. For the Genius wishes a man to have pleasure in the life he has given him. And so the Romans spoke of enjoying oneself as indulging one’s Genius, and of renunciation as spiting him. Men swore by their Genius as by their higher self, and by the Genius of persons whom they loved and honoured. The philosophers originated the idea of a man having two Genii, a good and a bad one; but in the popular belief the notion of the Genius was that of a good and beneficent being. Families, societies, cities and peoples had their Genius as well as individuals. The Genius of the Roman people (Genius Publicus, or Populi Romani) stood in the forum, represented in the form of a bearded man crowned with a diadem, a cornucopia in his right hand, and a sceptre in his left. An annual sacrifice was offered to him on the 9th October. Under the Empire the Genius of Augustus, the founder of the Empire, and of the reigning emperor, were publicly worshipped at the same time. Localities also, such as open spaces, streets, baths, and theatres, had their own Genii. These were usually represented under the form of snakes; and hence the common habit of keeping tame snakes1.

In the top part of the lararium (the architectural term is the tympanum) is where I personalized the symbols. In most of the larariums, like those in this picture to the right, the pictures shown are a patera (a shallow libation bowl), an ox-skull, and a sacrificial knife.

Within the heart of the Solar Disc one can see another image closely connected to it in symbolism, the so-called Stella Vergina. As the name indicates there is scholarly disagreement about whether this represents a sun or a star – though it is generally held that the symbol was connected with the Makedonian royal family, since it is found on the larnax or burial urn of Olympias, Philip II (though some claim this urn belongs to Philip III Arrhidaeus) and on numerous coins minted by the royal family. Vergina is the modern name of Aigai, home of the Argead dynasty which claimed descent from Herakles and Dionysos and ruled Makedonia in northern Greece from 700 to 309 bce. The most famous king of this Dynasty was the son of Philip II, Alexander III known to history as “the Great” and conqueror of the whole of the eastern world. In 331 bce Alexander was crowned Pharaoh of Egypt and founded the great city of Alexandria. Upon Alexander’s death, his general Ptolemy took over control of Egypt, inaugurating the fusion of Greek and Egyptian culture which we celebrate today over two thousand years later. Like Alexander, Ptolemy was a Makedonian (and there was even a tradition in antiquity that Ptolemy’s father was not Lagos but rather Philip, making them half-brothers) and so to honor these two outstanding men – and the Greco-Makedonian heritage they were so proud of – we have included the Stella Vergina in our official symbol.

There were several different forms of the Stella Vergina used in antiquity. It could have eight, twelve, or sixteen points – and we have opted for this last because that number held deep symbolic value for the ancient Egyptians. Sixteen represented abundance, fertility, completeness, and perfection. Sixteen was considered such a holy number because of its connection with the Nile river and the god of the Nile’s inundation Hapi (whom the Greeks called either Apis or Neilos). The association with sixteen arose because of the nileometers which were used to gauge the holy river’s levels. These nileometers contained markings a cubit apart – at around 8 cubits, the river would swell its banks and bring the much-needed nourishing waters and rich alluvial soil necessary to produce abundant crops and keep Egypt from being swallowed by the desert wastes that surrounded it. Sixteen cubits saw the river at its most powerful and beneficial heights. Anything above that would be disastrous. Therefore this number came to represent the god in both his fertile and benevolent aspect.

For some, the Stella Vergina may also resemble a compass star, which can suggest finding one’s way amid the tumultuousness of life, and the gods as guides in the process. It further symbolizes the hope of many of us that revived pagan religions will someday be found in all four corners of the globe and that the worship of the gods will flourish everywhere once more.

The little bundle of grapes to the left is for Dionysos, Who has been a powerful on-again, off-again Divine relationship in my life for the last decade. I originally thought that the knife to the right was supposed to be used to harvest grain, but after some research found out its supposed to be a sacrificial knife. Either way I’m not sure I did I great job on it. Anyway keep in mind that I’m hoping to have a large owl with outspread wings above the lararium at some point, and maybe something for Janus below it. We’ll see how it goes.

*All the names of my friends and neighbors have been changed for their privacy.

Like Loading...
This entry was posted in life, Roman and tagged household worship, Lares and Penates, Rome, Shrines. Bookmark the permalink.

2 Responses to Household Worship: My Lararium